Mr. Wang has served as a Senior Vice President at Harbinger Venture Management since August 2000. With more than twenty years of venture investment experience, Mr. Wang has been involved in three key areas for Harbinger. From 2001 to 2002, he worked for the Harbinger US office (Fremont , CA), focusing on IC design before moving to Harbinger’s Shanghai office from 2005 to 2008 to develop the Chinese domestic market. Since 2008, he has been assigned to the Harbinger Taiwan office, working in the fields of IT and Biotech.

From September 1994 to July 2000, Mr. Wang worked for MIC/III, a prestigious IT market research institute in Taiwan and the Asia-Pacific region. Prior to MIC/III, Mr. Wang was involved in professional training in IT, curriculum development, and wireless communication product manufacturing, testing, and trouble shooting.

Chih-Wei Lu is responsible for the research, product development and regulatory strategy in AMO. He is dedicated to the development of biomedical optics, specializing in optical coherence tomography (OCT). Dr. Lu received his Ph.D. from the Graduate Institute of Photonics and Optoelectronics, National Taiwan University and focused on OCT research. After graduated, he served in the Biomedical Technology and Device Research Labs (BDL), the Industrial Technology Research Institute (ITRI) and the Biomedical Engineer Research and Development Center, National Yang Ming University and led several projects on the development of electro-optical medical devices.

Mr. Lee is a representative of Chang Xiang Investment Company, Ltd. Mr. Lee has over 10 years of experience in the financial industry and he is also highly experienced in Financial and Actuarial Engineering.

Mr. Lee holds a Master’s degree in Actuarial Science from the University of Iowa.

Allen Lin is assistant vice president at chairman office in Hon Hai Precision, and he takes a lead for digital health. He is the chairman of GTM management company and in charge of GTM fund for healthcare investment.

He is the co-founder of Apollo Medical Optics Inc, and the company specialized in the optical imaging system. The technology was licensed from Dr. SL Huang’s lab in National Taipei University, and it’s based on the platform of OCT (Optical Coherence Tomography). He joined Taiwan Global Bio fund/ YFY Biotech Management Co. in 2007 and brought to TGB success in the incubation of several biotech companies. The most successful portfolio companies are Taiwan Liposome Company (4152) and TaiMed Biologics(4147). He got a licensing deal from the University of Washington and incubated a start-up IVD company in Neihu. Also, he serves as director of business development in this new company (MiCareo, Inc.). MiCareo focuses on developing a rare cell detection platform, such as circulating tumor cell prognosis, prenatal diagnosis, and circulating endothelial cell detection.

David leads the AMO team to establish and execute corporate systems, business development, international collaboration, and the overall management of AMO.  Dr. Ma’s prior positions include Manager of the Biotechnology Incubation Center at Academia Sinica and Director of Business Development for Medigen Biotechnology Corp.  David received his B.Sc. degree in Biochemistry and Molecular Biology from Purdue University (West Lafayette).  In 2009, he obtained a Ph.D. in Biomedical Sciences at Washington University in St. Louis.

Dr. Chian-Yaw Hwang is the superintendent of Yawen Dermatology Clinic, and the CEO and attending physician of his own private practice, Dr. Hwang’s Dermatology Clinic. Dr. Hwang is also the clinical consultant of AMO. In addition to clinical work, he serves as a lecturer for the Ministry of Education and the Department of Dermatology at the National Yang-Ming University in Taipei.

Dr. Hwang received his MD from Taipei Medical University. He continued his medical training as a resident at the Taipei Medical University Hospital in the Department of Surgery. He then went on to become chief resident and attending physician in dermatology at the Taipei Veterans General Hospital. Dr. Hwang also served as a visiting physician at the Yale-New Haven Hospital. His specialties within dermatology include Atopic dermatitis, Rosacea, and aesthetic dermatology, and he has several research publications on these topics.

Donald has had over 30 years of industry experience since receiving his M.S.E.E. degree from Taiwan’s National Chiao-Tung University in 1983. He joined Acer as an ASIC designer in 1986, and developed Acer’s first laptop PC in 1990.

Haolin Sung is the founder and managing partner of Chaperone Investment, a Taiwan-based venture capital firm focused on angel and early-stage healthcare and biotech investments.

For over 12 years, Haolin has dedicated himself to building and developing several companies including Panlabs and MountainVet as a board director. He held the same leadership position at Pharmigene. In addition, Haolin currently serves in critical roles at various Chaperone portfolio companies including Celtech and Caliway where Haolin helps establish funding, devise business development strategies and implement licensing activities. Prior to launching Chaperone Investment, Haolin was the director of the direct investment department for Diamond Biofund, the largest Biotech VC in Taiwan. Haolin was also the deputy director of Microbio Biotech in Shanghai. Haolin was previously with First Capital Management as a healthcare/biotech industry analyst.

Learn more about our OCT image and how to read it. 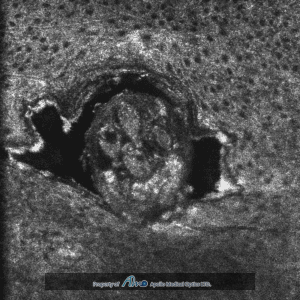 Save time by starting your support request online and we'll connect you to an expert.